A few weeks ago I spent a wonderful sunny autumn day visiting small scale organic farms in the Daylesford Macedon Region thanks to an event organised by Daylesford Macedon Produce as part of the Melbourne Food and Wine Festival.  On the tour we visited four different organic farms and saw how they each ran their businesses. For me it was an interesting and inspiring experience whereby I took away something from each of the places we visited.

First stop was Angelica Organics- Aneglica is famous for its garlic. But what I learnt- It is possible to grow a sustaining vegie and produce business on just FIVE acres of land and even commerically grown cucumbers and zucchini end up a little worse for wear with mildew by the end of the growing season. I have to say the garlic was beautiful and I am looking forward to popping a few cloves in the ground to enjoy next summer.

Next stop on the road was Mt Franklin organics. This farm was run by Florian Hofinger an Austrian and former chef at some of Melbourne's five star hotel. Florian is using 2 acres to grow a whole range of herbs and vegies for the local farmers market circuit.
The farm here is run on solar. This was a decision primarily made on the basis of the practicalities and cost of having the mains power connected- but just proved a practical example that living off the mains is possible. It isn't however so practical in terms of running a cool store- meaning without one its necessary to get produce to market quickly! 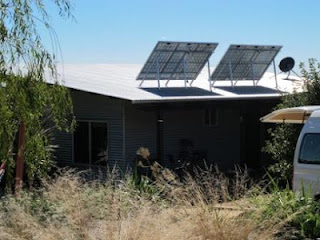 The next stop was Captains Creek, a winery and mixed farm. I was particularly interested in the way livestock (sheep, cows) were raised in a mixed farm environment with the winery, orchard and nut groves. The sheep help out fertilising and weeding in different areas of the farm and winery at different times of the year. Apparently throughout the worst of the drought - when other people were needing to bring in expensive additional feeds the sheep here were munching on chestnuts. 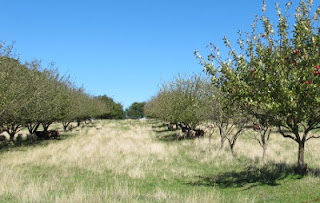 The last stop for the day was Daylesford Organics- how AMAZINGLY cool are these chook trailers. 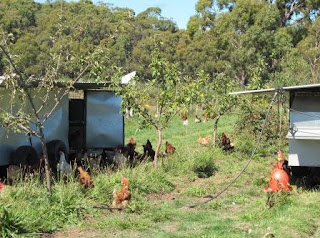 The way the system works is that the trailers are moved to whatever part of the farm needs a little weeding and fertlizing (in the case a new orchard area). The area is fenced of with electrified mesh and the chooks are placed under the guard of friendly Marema pooches.... 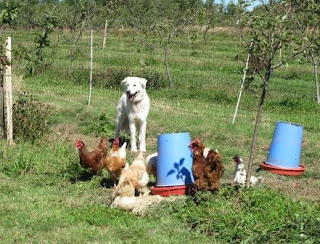 The chooks use the trailers as laying and sleeping quarters. The floors are wire so poop from the inevitable early morning poop fest drops straight to the ground. Each day the trailer is pushed along a few metres to spread out the poop. Once the trailer has travelled the length of the pen the chooks are locked into the trailer one evening, hooked up to the back of the truck and driven off to the next area. I was also interested in the presence of a number of roosters- which I am told we sold as one day chicks supposedly of the opposite sex. Lucky for them, egg production, whilst a lucrative offshoot is not the only source of income for the farm so they are allowed to stay and enjoy an idyllic life happily foraging amongst there girls. According to Brendon the owner it helps keep the girls happy and content. 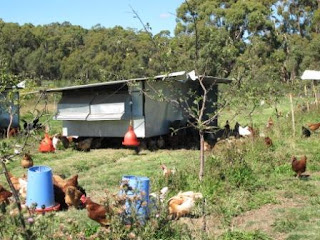 Looking at all the different farming systems on the day was really inspirational and really made me question the way large scale conventional farming works. We are taught that this is the only practical and economically sound way of doing things- but it gets to a point where we might get so big and compartmentalised that the efficiencies really start to hit a brick wall. Expensive fertilisers and practises that degrade the soil can only last so long and I hope that people will begin to see the value smaller scale sustainable farming can bring.
Posted by Jodie at 12:29