Once again its been a long time between posts- but besides spending two weeks away in South Australia I have not been resting on my gardening laurels and there are expansion plans afoot.

Not content with the limitations of my backyard I have started expanding frontwards and have decided to make some ornamental yet edible plantings in the north facing bed infront of the house. This area has proven problematic in the past as it sits under the overhang of the verandah eve and thus getting no natural rainfall. The garden has an existing box hedge planted by the previous owner as a presale instant garden 'tart up' so my creative vision is for a formal french style potager bed with a row of cabbages interspersed with tyme bordered by the box hedge - my vision and the reality may end up somewhat different but I will give it a go. 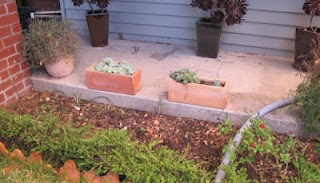 There's also been some expansion in the lanwey guerilla garden with the installation of a raised planter. This was my birthday present request to G. I  had been pondering options for creating DIY recycled planers when I saw a demonstration by the Urban Bush Carpernters at the Sustainable Living Festival and got extra inspired. Their website provides free plans for recycled planters out of abandonned pallets. Being the proud engineer G created his own design and found some fantastic hardwood that once served as an internal wall of a period home. It was chucked on the nature strip labelled- free firewood. I almost feel guilty that such good timber is ending up as a garden planter in a laneway. In reality it was a little tricky to work with and most of the work involved removing the many nails where the plaster had been nailed on. 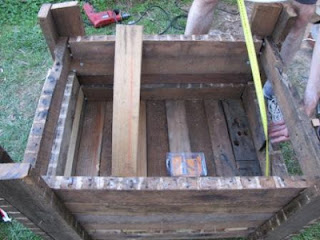 Now that its been put in place I have been busy planting out some of my favourite 'royal blue' potatoes. (I grew the seed potatos in one of the tyres from a couple of original spuds that grew at the bottom of the pantry). Here they are four weeks later. 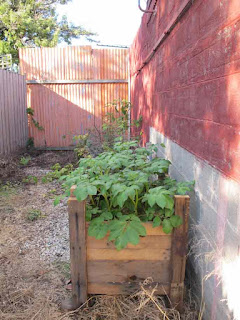