The perils of a guerilla garden 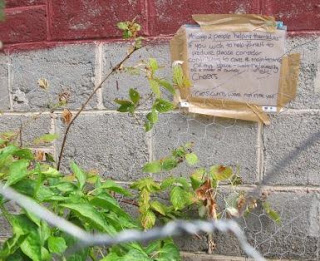 Behind my house there is a dead-end laneway. Abandoned and unloved- who could resist the temptation of taking over for a bit of guerrilla gardening. I have been growing plants there for a number of years now- I have been using old tyres (no one will steal them) but the jury is out if they are safe to use due to potential toxic leachate so I currently re-thinking this strategy. Over past summers I planted zucchini (with limited success), pumpkin (with no success- not enough morning sun?) beans, capsicums and  feral tomatoes. Very early in the spring I planted out surplus raspberry runners.Following my bumper seed saving and sowing I was left with some surplus capsicum which I chucked in the tyres. Its also worth noting that I had previously topped up the tyre garden with some newly composted chook poo -so I was secretly chuffed when the plants not only grew and survived but out- budded and fruited the plants actually growing in my garden. Sadly when I popped out last weekend - ALL of the dozen or so baby caps were gone- extra sadly was they weren't even ripe. I am convinced it wasn't kids or vandals (they would have just chucked them on the ground)- and I have had a sneaking suspicion its not the first time- tomatoes and raspberries have also gone but it was hard to pin the blame on a human with those- there's always birds and rats an an escaped guinea pig (who happily ran the gauntlet of the local cats and survived out there for a week or so before we reunited him with his owners)- but anyway the capsicums were well and truly picked and taken. I have a put a sign up suggesting that who ever it (I have my suspicions) might like to join the cause by helping to water an nurture the plants. There's still more baby caps so will be interesting to see how it goes!
Posted by Jodie at 12:42