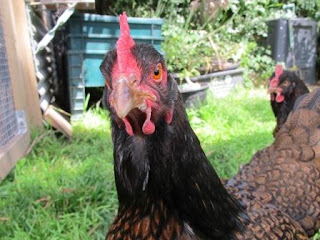 Meet Boss & Spazz our Barnevelder chickens...... Its hard to believe just a year ago they were just 2 cheepie little chicks and we were the proud new parents who had no idea what we were getting ourselves in for. (its also hard to believe that these tiny 5 week old chicks are the SAME age as your average supermarket roast chook was before it became roast dinner- something freaky is seriously going on there)﻿ 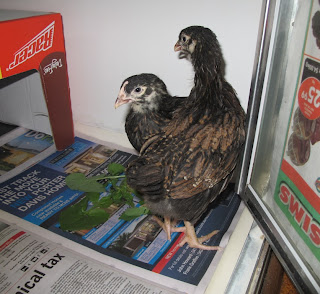 But anyway it seems nowadays chooks are the must have suburban backyard accessory... I am not going to admit to jumping onto the trendy hipster bandwagon- because it was my idea first! But I will admit to my choice of  chook breed came directly from being too obsessed with SBS Gourmet Farmer. The first step that delayed getting the chooks for a long time was finding somewhere to put them- this problem was solved when the top half of  struggling wattle/accacia up the back snapped and we decided it had to go. This freed up enough space next to the shed- which had the added bonus of providing a secure wall to one side of the enclosure. 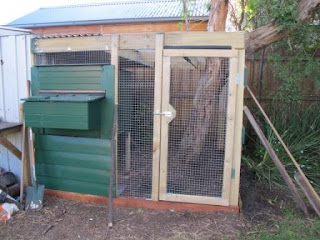 The cage is a mix of new and scavenged materials that gave Glenn a few weekends worth of DIY excitement. The next stage in the process was securing the chickens. We found a breeder by the name of Hazel who advertised on the Backyard Poultry website. Hazel was happy to invite us down to her property at Bannockburn to collect our babies. She led us into a shed with the broody boxes and we were presented with half a dozen chicks to choose from- scooped out of the broody box with a net! I grabbed 2 largest chicks and so it was we became chicken owners!  As for naming the chicks as they were supposed to be livestock not pets so we didn't set out to name them at all. Unfortunately the practicalities of differentiating the who's who meant the chickens named themselves. Boss got her name as she was the leader of the 'flock' since day one. Boss would be the first to try new things and the chick who would take the lead when it was time to go to bed. Poor Spazz on the other hand seemed to struggle a bit at the start... she got her name as her feathers on her wing are often sticking out sideways and an early lesson in flying seemed to end badly when she refused to jump off the perch. Now shes a fully grown chook - shes not the boss in the leadership sense but she certainly is bossy... her technique is to grab onto what ever tasty morsel Boss has has found and push her out of the way so Boss doesn't get it back.
Posted by Jodie at 17:23

Email ThisBlogThis!Share to TwitterShare to FacebookShare to Pinterest
Labels: the Barnevelders