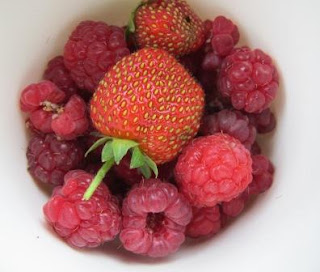 This afternoon I fought the chooks off to pick this beautiful punnet of berries. (The girls are obsessed with raspberries and stand at the fence whining and waiting for the cast offs- the berries that have been left to long and withered or been attacked by whatever).This is pretty much what I have been collecting now on a daily basis well over a month (or more?!). Raspberries are my favourite fruit and we have been enjoying them every day- chucked onto whatever other deserts I have cooked up, with pancakes or by themselves. Dollar spent for dollars worth produced, the raspberry canes have been one of the most beneficial additions to garden. I think all up it would have cost me about $8 for the 2 lots of canes I bought (one from a Japanese gardening guy at the Japan festival- who also sold me my first Japanese burdock plant) and a pack from Bunnings which I think the current lot are descended from. In all I would have grown punnet upon punnet this year and at an average price of $4 a punnet thats not a bad investment!

Amazingly the strawberries have also managed to produce.. despite the damage done by the girls when I let them sun bake in the corner over the winter and despite being taken over by the raspberries. I think I they have been helped along by being dug up, replanted and given a good fertilise with the chook poo. Not to mention careful placement of beer traps to kill off the resident slugs.
Posted by Jodie at 18:38

Email ThisBlogThis!Share to TwitterShare to FacebookShare to Pinterest
Labels: raspberries