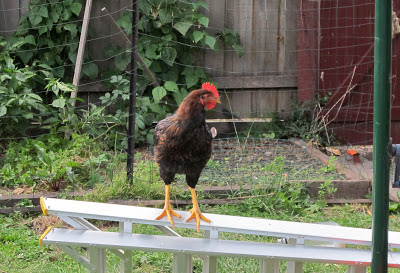 Sitting down to my regular half hour "grow your own eat your own" fantasy fix that is SBS Television's Gourmet Farmer last Thursday, I was dismayed to see it is now sponsored by Lilydale 'free range' chicken. Surely Mr Matthew Evans, Gourmet Farmer would be dismayed too, to see that everything he goes on about- honest food- that's raised in a ethical way- was being compromised by 'Big Chickens' muscling in one the vision we all wish we had access to everyday. Lilydale chicken is owned by Baiada- Australia's largest chicken processor. Aside from the fact that free-range is very much a side business (albeit growing) from its regular factory farming business, Baiada also has a dubious reputation for its treatment of workers, many of them new migrants to this country- you can read more about that here and here (be warned the second article is pretty nasty as it describes the death of a worker at the plant). Another big chicken processor La-Ionica was fined a $100K by the Australian Competition and Consumer Commission for misleading customers about its 'free to roam' factory chooks. La Ionica also has its own 'free range brand' - Bannockburn Chickens, given the company's history who knows if they are actually free range as we think of it or if they even come from the town called Bannockburn (just west of Geelong).

With all this on my mind I thought it was time I got around to telling the story of my real Bannockburn free range chook- from his journey as an egg (yep, he was conceived in Bannockburn- hopefully where his parents are still happily pecking around in the yard) to our plates a few weeks ago.

Its a journey that many people I know have questioned as a matter of ethics..."but how could you do it?, "isn't he a pet?", "if you don't need him wouldn't it be kinder to take him to the vet and have him put down?"(mmm- after which time he would be put into landfill while I went off to buy another chicken?) But the fact is I eat meat and if I can't face up to the reality of that in my own backyard, is it right that I allow the 'brand' on the supermarket shelf to hide the reality of really going on?

The decision to raise chickens was one we had considered carefully with the decision if we had a baby rooster (a part of the natural process) we would dispatch and eat it. When our five chicks hatched I kept a sense of detachment, anyone one of them could have a life measured in weeks rather than years. But each week was a good week- from about one week old they were out scratching in the yard (under our watchful eyes for just an hour or so at this stage), hunting and digging. As they grew it became obvious there was one rooster in the midst. He was a bit of an individual, he loved sun baking, legs splayed, wings stretched (maybe because it took him ages to feather up- a sign we were warned by the breeder he would be a boy). As time went on I wondered wouldn't he make a good breeder (picturing a bucolic image of him standing proud over his flock) - but when I went into the for sale section of backyard poultry there were dozens of other people with the same idea. In commercial farming, free range or not  roosters are expendable,  they are summarily executed on the first day of their lives. My boy had the chance to run around, roll in the dirt, carry on like a complete ratbag chasing the birds, woo the ladies,and towards the end do what roosters do with his surrogate mum and half sisters- (god love him)  thankfully I don't think he got it quite right!

Once he started crowing it was pretty much time to face reality. I researched on the net- 'home chicken killing'- forums on different methods, what time is the right time. Most people seemed to think around 14 weeks before they get too leggy, some people said killing chickens older than that wasn't worth it as they were all leg and no meat, others suggested waiting until 22 weeks for heritage breeds when the meat had filled out. It all seemed right in theory.... but I was worried about the practice - what if we got it wrong? I wasn't sure I personally had the physical strength to make sure it was a clean kill. To add to the dilemmas, G crashed his bike and tore the ligaments on his fingers rendering him 8 weeks out of action... with a loudly crowing rooster cooped up in the spare bedroom at night.

It was through my connections with the local permaculture group we got the opportunity to dispatch our rooster as part of a skill share session. Anyone with an interest could come along and learn how to kill, pluck and butcher their home grown roosters. In the end three others joined G and I when we drove him 500m up the road to the local community centre. Rather than the fear and terror that must be felt by the millions of other chooks, snatched in the darkness, jammed into crates and driven out in the open at high speed down the freeway, our rooster was sitting in his familiar crate (albeit a little hungry and impatient). When he was taken out and held upside down by his feet he seemed a little annoyed, then dazed for a minute as his head hit the block - then it was all over in a short couple of seconds.

Everyone then learned to pluck, gut and joint the chicken. The moment the feathers came off we could see the difference, long and leggy, his skin yellow.


We brought 'Roo Roo' home in a plastic tub. As a small sign of respect, or rather sentimentality I took the bits we didn't want (the head and feet) to bury in the garden next to my other beloved hen. With the smell of fresh meat, his mama Boss came running over expectantly looking for some tasty treats. It seemed a bit macabre but really made me appreciate there is no such thing as sentimentality in the animal world. In my chook's eyes one minute he was there and one minute he was gone, end of story.


But I am a sentimental being- so I wanted to make sure this meat was treated with respect. Originally I had planned my favourite roast chicken recipe, but with dispatch happening on Sunday we didn't have the time to let the meat rest so we opted for 'Coq au vin' (Mathew Evans recipe) using a good bottle of Riesling, some free range pancetta (substituted for the prosciutto which was not available) and stock I boiled down and froze from my last roast chook. For such a seemingly skinny bird I struggled to jam all the pieces (including the frame) into my stove top casserole dish. All in all he gave us four delicious meals:
(plus I took a small taster to work for my colleagues who were curious enough to try).


On the first night, I set the dining table and opened a good bottle of Ten Minutes by Tractor Mornington Pinot as it seemed apt to respect and reflect.

At the end of it all, was I glad I did it ? Yes. Would I do it again  Yes, although our chicken breeding days are over for now. What did I take away from it all? That we should think deeply about where our food comes from and that we should also take time from our busy lives to pay respect for a moment for the animals we didn't know and where ever possible make sure we choose the most ethical meat options we have available.

Email ThisBlogThis!Share to TwitterShare to FacebookShare to Pinterest
Labels: the Barnevelders