You know when you have well and seen the very last vestiges of the summer when you have pulled your last tomato plant- letting go of the last juicy green tomatoes that will sadly never ripen. Today I pulled the last ones out from the back corner of the lane- they get away with staying up there jumbled in with the raspberries. But I have pulled them out and planted broad-beans- like the tomatoes I will let them run rampant up in the back corner.

Out in the Pitt Street block we are coming to the end of the 6 month council  trial of the planters. Most people have cleared out the summer crops and have winter crops well underway in anticipation of the planters remaining post the trial.

I am still growing the Lebanese eggplants I planted very late in the season. Each of the 3 plants has yielded heavily and is still fruiting. I would like to leave the last fruits on the plants but it's a difficult balance as I lost a couple of kilos to pilfering neighbours (to my knowledge these are the ONLY things that have been seriously pilfered so they must have been good). I am hoping to scratch together the last of them for my final serve of Chinese chili eggplants.


Two of the box 'owners' have officially relinquished their responsibility for their planters and until the future of the project is known I am planting out with the leftovers and thinnings of my winter seedlings.

I am trying new crops this year sprouting broccoli and cabbage. Seed from my carrots has run rampant in the backyard garden so I have spent the afternoon planting into the abandoned planter boxes. I hope that if the garden remains we can get more people involved in planting out boxes - but in the meantime I am not wasting space!

In Meg's box the seeded coriander is also running wild. When my chook litter bin was overflowing I gave Meg a bag of the composted wood shavings and poo. (I think it was the secret of the eggplants and is now paying dividends with the coriander). In exchange for the poo I have thinned out some of the coriander that's now choking the spinach. 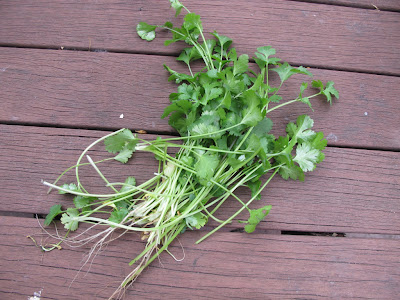 I have pruned the basil from an 'unofficially' relinquished planter box for a last jar of pesto before winter sets in.

In the of  midst all the gardening action I have also been busy with another project- which I must now shamelessly plug!

Its an idea that's been knocking around since my trip to the Solomon Islands last year....  at the time it really worried me what happens to plastic waste in countries where there is no where (recycling/ landfill)  for it to go. Based on my work back here in Australia I came up with the idea of up-cycling the plastic into building materials. The technology exists but it would need help to get it over there and on the ground. A week ago I saw an ad for an international competition to make it happen.... if I have piqued your interest in something non garden related... please take a look...http://www.thisisyourplanet.com/ideas/beauty/329 . The competition works by popular vote. The top 4 ideas from each category (mine is beauty- as in the environment not as in me personally) go through to a professional judging round and the chance to gain $25k towards making it a reality. I am currently tracking in 5th place and all it needs is a few more votes...
Posted by Jodie at 20:31