A little while ago I read an excellent analogy used to compare a renowned climate scientist and his views and predicitions versus those of a local climate sceptic who constantly finds reasons why the world is not warming such as "xxx part of the world has just had its wettest, coldest summer since 1944" etc. The analogy begins with the climate scientist and the sceptic both out in the forest. The climate scientist has access to a fire tower used to spot oncoming bushfires so he climbs to the top  holding a pair of powerful long range binoculars. Over on the far horizon he can see a massive cloud of smoke coming over the hills towards them so he calls out to let the sceptic know there is a bushfire on the way. Down on the ground all the sceptic can see are some trees "no fire here, lets get on with out picnic" he tells the scientist. Without wanting to sound like the antithesis of that sceptic "'back in my day we always had frost at this time of year" - it really does seem like the winters are getting shorter here in my neck of the woods.

Here's a couple of pictures of my capsicums back at the start of the month: 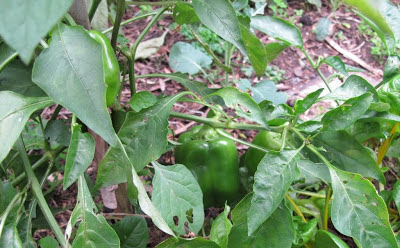 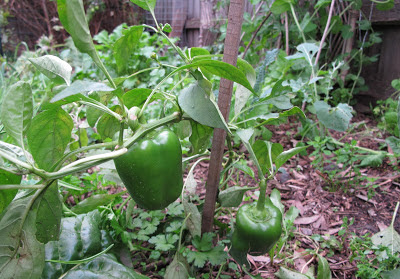 I have also been picking the very last of the eggplants and the climbing beans (that has to be a record for June!)

I finally harvested some fresh turmeric as the leaves yellowed and began to wilt combining it with some other slightly tropical ingredients - chili and lemongrass to make my seasonal a new seasonal favourite from Neil Perry.

Since the photo of the capsicums was taken, we finally got a cold snap (compressed into one week it seems) which finally managed to budge some of the green leaves from my crab apple. My pathetic stick of an apple tree- (its never given me an apple)  is still hanging onto one green leaf.

Throughout the month of May and the start of this month I have been keeping up my challenge of eating at least one thing from the garden each day but with cold snap and my beans finally finishing up things are getting a little more sparse.

My Tuscan kale is not far off though, and the first of my broccoli is starting to develop little buds in its crown. I have planted a few cabbage out in the planters that seem to promise they will form nice round heads and my snow peas have gone ballistic (just a matter of making sure the pesky rats don't come back)

Thinking ahead my plans to build a new planter for my next summer planting of Japanese burdock ('gobo') out the back away from my chookies were fast forwarded thanks to the discovery of this dumped pallet. It was perfect for my plans to grow a single row of gobo along the wall here. In the meantime I have planted some chard I got from the local produce swap and some more broad beans. 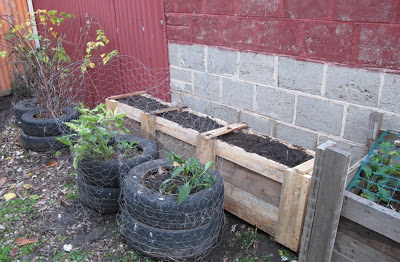 Email ThisBlogThis!Share to TwitterShare to FacebookShare to Pinterest
Labels: whats been growing in June.