How to keep a rooster in suburbia.....


Ok this is my second chook post in a row, but its an issue that's been preoccupying us of late. How to keep a rooster in suburbia. Lock him in the wardrobe of your spare room seems to be our current answer! Not permanently of course!

Using a 'night box' for roosters is a common solution to keeping roosters in suburbia and it's a technique we have been experimenting with over the past few weeks. Basically the theory goes that if put your rooster in a box/pet carrier and put it somewhere dark and quiet (sheds and garages are the normal options) the rooster is disorientated and unaware that its dawn so doesn't crow (or alternatively the sound is so muffled no one can hear). Catching him to go into the box has proved the most difficult part of the exercise. First we bring him inside and give him a few little snacks. He actually doesn't seem to mind the box, no doubt it's warm and dark and quiet and makes for a better nights sleep than being jostled by the girls outside. Of late hes been jumping off my lap and walking in there of his own accord.

As we don't have a garage our first option  for the box was the shed. Unfortunately our chook pen is a kind of a lean-to on the side of the shed so the minute the girls were up and squawking, off went the rooster. We could still hear him (and the girls) at the front of our compact weatherboard house- no doubt so could some of the rear neighbours.  The next step was the laundry. As I am yet to get around to organising my dream renovation to transform the laundry/ toilet into a European laundry with powder room and toilet there is still an old shower with fully enclosed glass screening. This has actually proved very handy on a few occasions.  It's where we kept our first two girls before they were big enough to go outside and more recently two dwarf rabbits I found on the run in my street. Eventually as no one claimed them, ,they were re-homed by the RSPCA (much to the relief of my cat). Unfortunately directly across from the laundry is the back of neighbour's house with rooms that are being rented out to international students. Our rooster was less excited by the girls but it only took a flock of the local ravens or a singing magpie and he was off again. With daylight saving drawing to a close I also didn't feel like a 6 am wake up so we needed to get creative. G suggested the wardrobe and its worked a treat. If he does crow we can barely him, let alone the neighbours, so the wardrobe it is. 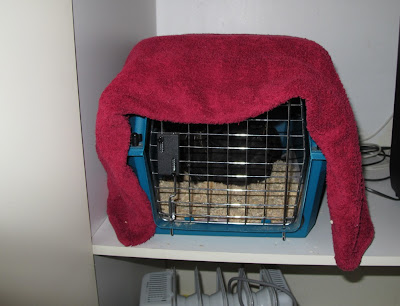