A noise in the night.

Last week I had an experience I seriously I hope I never have again. Fast asleep a noise came into my consciousness.

Although I don't own a rooster I am used to being awoken by what I refer to  as 'the whining chook'. Its always a sign I am enjoying a sleep in and those outdoors let me know about it.  "Bawwwwk bawk bawk" (which roughly translates to "let me out NOWWWWWW. I have not been fed so it must be a weekend. I want OUT Now")

But this sound was different.... it was the same voice... but it was hysterical.... It was the same frantic sound that comes out when the girls  (for whatever reason of momentary excitement) attempt to flap and  fly across the yard, but this time it was much more intense, like lives were depending on it. The sound an animal makes when it expects any breath will be its last, an unmistakable urgent sound that at once reminded me of the sound of my pet rabbit being dragged over the back fence by the neighbours cat many years ago.

It was dark and time stopped still as I ran through the house and flicked on the back light. All that time I prepared myself - for what I could imagine was happening.... one chook dead (headless??) or mortally injured the other carried off in the jaws of a fox. It had to be fox. It was the end of Boss and Spazz. I had to be prepared.

When I reached the pen the girls were still screaming, the neighbours dogs were barking and I reckon half the neighbourhood was on the verge of waking up. From the lights out the back I could see the girls on the ground, they were still screaming, puffed up like an angry rooster, wings flapping. It seemed whatever had caused the disturbance must have high tailed it out of there...... and after a few seconds I reached down the touch the girls and reassure myself they were completely safe and unharmed.

All of  us were still in shock. I gathered them up one at a time and took them into the shower in the laundry, where they used to live before they were big enough to fend for themselves out in the elements. I threw down some paper and wood shavings and after they started happily pecking on the wood shavings (eating wood shavings where they sleep is part of their nightly routine - even after they have had a feed- go figure) I pulled out the magic red cup- which is what always has their favourite mixed grain. In an instant the happiness had returned and it seemed all the trauma was forgotten. I guess to be a prey animal living on the edge of your existence- every time one of your comrades is picked up and eaten you can't really afford to dwell.


To be honest we are not really sure if there was a fox or not. Something had been digging up the back in the corner behind the shed but to get in there is no mean feat that has even the cats beat. But regardless its been a wake up call. According to the Victorian Department of Primary Industries there are more urban foxes than rural cousins. Its likely that the work on the regional rail link may have displaced the fox population that has happily lived down in the rail reserve with its plentiful supply the resident rabbits and sent them packing and hungry into the neighbourhood.

The girls are lucky that they live in a somewhat 'over engineered' pen with a wooden frame going around the base, wire below the surface and a row of bricks, rocks and concrete rubble testing the the digging skills of any animal. To add to the fortifications we have now added a horizontal board of treated pine nailed along the back fence creating an additional digging barrier to anything trying to get in.

After all the drama I hope the girls are grateful and can pay me back on the investment with just an egg of two. 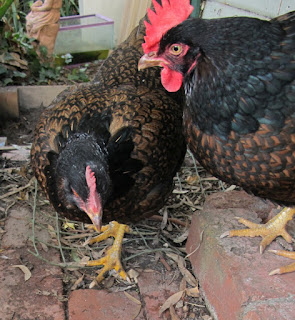