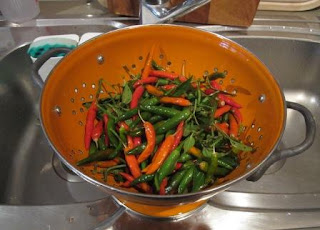 The recipe was largely adapted from a cook book published by the "Blue Lagoon Resort" cooking school- (as thats somewhere in Thailand it created somewhat of an exotic fantasy image on such a torrentially rainy, freezing day in Melbourne). The recipe was kind of followed but adapted to involve most of the chillies in this colander, whatever left over bits of garlic were left in the cupboard (would estimate about a dozen cloves of varying quality), and an equal measure of brown shallots. The garlic and the shallots were peeled and dry roasted in a pan along with the chillies and 1/3 cup dried shrimp. These items were then all chopped up with the bamix chopper attachment and fried up again in the fry pan with some veggie oil. To this we added a few tablespoons of palm sugar and tamarind paste plus 1/4 cup of fish sauce. To this we added more veggie oil to preserve in sterilised jars.  The end result being three potent jars of Thai chilli paste to make a great starter for Thai curries and Pad Thai 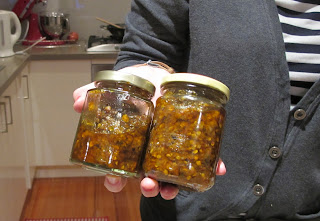 In addition to add to Thai cookery Ruth and I also spent another Sunday making Camembert at a CERES cheese making course but I am not sure if that really qualifies for discussion as part of the home grown challenge- not until I manage to find a way to keep my own cow of course!
Posted by Jodie at 10:31

Email ThisBlogThis!Share to TwitterShare to FacebookShare to Pinterest
Labels: chillies