My vegies- psychic rewards for my middle class self??

So says 'a senior government figure'who was recently quoted in one of the articles from the Age's recent 'Future of Food' series by Royce Millar and Melissa Fyfe. The article posed the question as to whether or not 'alternative' food sources (namely farmers markets, vegie box schemes and home gardening) really do provide any value as useful food sources when stacked up against the modern agricultural food distribution model and the dominance of Safeway and Coles.

I would be interested to know how  'Mr Senior Government Figure' could possibly come up with the conclusion that growing all this food does nothing more than make people feel better and if anyone out there in government land or the mainstream food sector has any idea how you might measure the impact of small scale farming and vegie gardening.

The other day I was at the supermarket (even I will admit there are limits to the backyard and the Queen Vic) and I saw a billboard ad encouraging people to eat eggs..... I secretly hoped it was because the Australian Egg Board isn't keeping up with their projected sales growth targets- blaming consumers eating trends rather than the little mini chook boom that's spreading out into the suburbs. Despite being a newbie to art of keeping backyard poultry, I for one haven't bought an egg at a supermarket in years and between G and myself we know at least five families keeping themselves, friends and neighbours stocked with eggs.

Anyway as a bit of an exercise I have attempted to put 'Mr Senior Government Figure' back in his place and to quantify the pysical rewards from the week in the garden. (it goes without saying there are plenty of feel good rewards from venturing into the garden for a healthy dose of fresh air and vitamin D)

First to the financial savings-  here's the tally from a very quiet winter week in the garden (things in brackets were taken from the garden): 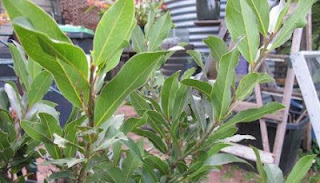 Menu:
Sunday- homemade chicken pie with mixed herbs (thyme, sage)
Monday- lamb tagine with preserved lemons and harissa (tomatoes- I am lazy so I chop and freeze, thyme, bay leaves, chillies via red harissa  and preserved lemon)
Tuesday- pumpkin and leek risotto (parsley)
Wednesday - more tagine leftovers (as above)
Thursday - was out for dinner
Friday - Pizza (almost the last of the capsicum)

From this tallying up my food savings for the week: (a quick price check a Woolworths)
Grand total savings not going into the pockets of the big two: approx $14 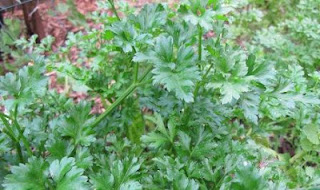 Of course you need to factor in the cost of inputs (the cost of the plants, soil, pots where required) - but pretty much everything on this list was either free (ie. lemons or grown from seed) or bought so long ago that comparing a $3 punnet with those prices they were paid off in the first month or so (my bay tree was a bargain from a weekend growers plant stall at a market). Tell me anyone who doesn't think saving more than $500 a year or so isn't a reward!


Back on the fuzzy side there's the environmental rewards made from reducing packaging (the herbs came in a plastic punnet type thingo and I have skipped the need for 2x tins, a couple of  jars for my harissa and the preserved lemon) each of these coming with notable environment savings (see Get it Right on Bin Night - a blatant plug for the whats been keeping me busy as part of my day job). Recycling is good but not creating the packaging in the first place is even better! Not to mention the reductions in energy for transporting and storing all of that through the supply chain through to the supermarket.

So to summarise - Mr Senior Government source- gardening in the suburbs is really more than the feel good factor and if everyone got involved we might stand half a chance of meeting the food challenges all 7 bilion plus of us will all be facing in the future.
Posted by Jodie at 14:11